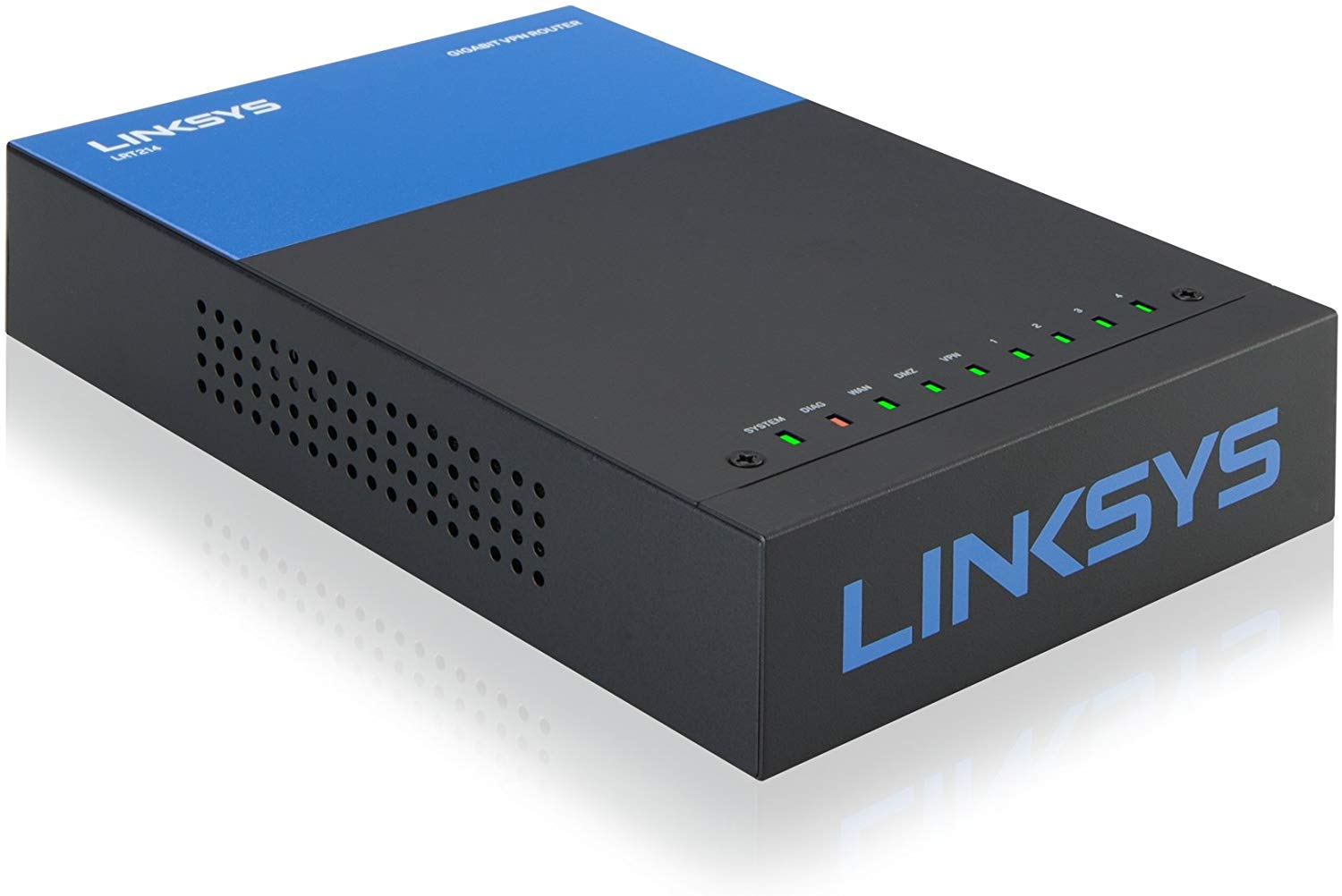 Wired routers serve as a traditional yet time-tested and more secure means to put up a network with a stable high-speed Internet connection. For this reason, many homes and, more importantly, businesses around the world still stick employ wired routers.

Comparison Of The 5 Best-selling Wired Routers

We have gathered the top five best-selling wired routers in the market today. Putting them side by side, we compared them based on the features that you should expect from a wired router. Some of these key features include physical features like ports and security features like administrative control, VPN support, integrated firewall, and DoS attack protection. These features play an essential role in keeping your wired network infrastructure and the computers/devices within away from various types of security threats.

This wired router from D-Link empowers network administrators to regulate network users’ Internet usage. Static web content filtering removes Java applets, ActiveX, and cookies that might be malicious and cause harm to the network and devices.

This wired VPN router comes with eight Gigabit Ethernet ports and one Gigabit WAN port and can support up to 25 IPsec VPN tunnels and 25 additional PP2P/L2TP tunnels. It can also support five SSL VPN tunnels and ten GRE tunnels.

The Linksys LRT214 Business Gigabit VPN Wired Router comes with a built-in Gigabit firewall, a site-to-site virtual private network (VPN), and an array of different remote access VPN technologies — all rolled into one compact network solution. The LRT214, along with the LRT224 dual-WAN wired router, joins Linksys’ family of business wired routers that deliver secure and dependable network service for home and small office employees, whether they’re working in their cubicle or deployed for fieldwork. The LRT224 dual-WAN VPN wired router can aggregate the bandwidths of both WAN connections, resulting in higher Internet bandwidth. It also features WAN Failover that allows operational continuity despite WAN Internet connection failure.

Linksys’ LRT214 wired router allows OpenVPN clients installed and running on employees’ devices like laptops, smartphones, and tablets to establish a connection with offices with two-factor authentication for enhanced security.

Speaking of security, this wired VPN router also comes with a built-in firewall that does URL filtering and manages access rules set by network administrators to further monitor and control traffic within the network based on services and source addresses.

This wired router from Linksys features an easy-to-use intuitive administrator interface that enables small and home-based business owners to deploy and manage routers in their network infrastructures even without the help of a dedicated professional IT personnel. 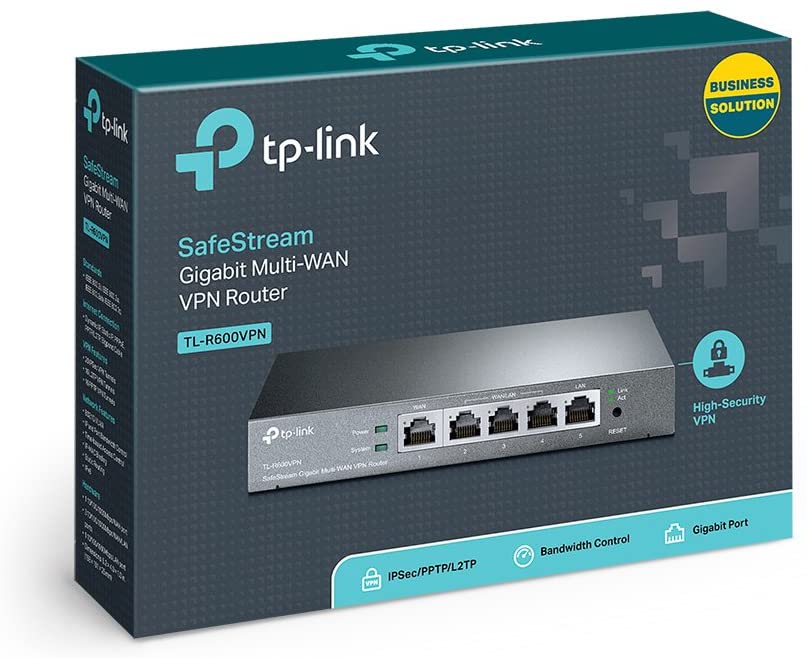 This wired router from TP-LINK protects you from external threats with features like an SPI firewall. It can automatically detect and block DoS attacks like TCP/UDP/ICMP flooding and ping of death, as well as other forms of cybercriminal and malware attacks.

TP-LINK has employed a professional lightning protection technology designed to prevent negative impacts of electrical surges on the internal parts of the wired router. This feature ensures that the network infrastructure remains safe from natural harm.

Ubiquiti EdgeRouter X best-selling wired router offers home and business users cost-efficient router performance in an ultra-compact form factor. Equipped with a 24V passive power-over-Ethernet (PoE) or a power adapter, the EdgeRouter X has a passive PoE option, capable of activating an airMAX device. Connectivity-wise, this Ubiquiti wired router comes with a total of five independent Gigabit Ethernet terminals that can be reconfigured for switching. Network administrators will find this router easy to use, thanks to Ubiquiti Network Management System, an integrated comprehensive user interface (UI) that allows users to manage EdgeMAX devices across different remote sites.

Ubiquiti EdgeRouter X wired router solution arrives in an ultra-compact form factor that can suit any home or small office environment. Despite its small size, it’s a complete solution with its array of ports and easy-to-use interface for remote management.

Backed by Ubiquiti’s proprietary intuitive UI, every EdgeRouter X can be configured for routing, security, and management based on your network’s requirements. Network professionals can also use the router’s CLI (command-line interface) for faster deployment.

Mikrotik hEX S five-port Gigabit Ethernet wired router addresses the network requirements of locations that do not need wireless connectivity. Put side by side with the original hEX, this best-selling wired router also comes with an SFP (small form-factor pluggable) port and a PoE (power over Internet) port. Small, affordable, and easy-to-use, the hEX S runs on a dual-core 880MHz processor, 256MB RAM, and RouterOS that supports advanced configurations. In addition to connectivity, this Mikrotik wired router also carries a USB 2.0 connector and a microSD slot for file storage.

Mikrotik hEX S caters to the needs of wired network environments that do not require wireless connectivity due to security and stability concerns. Equipped with a set of five Gigabit Ethernet ports, this wired router targets home and small office users.

Apart from the Gigabit Ethernet ports, the hEX S also comes with a USB 2.0 port and a 1.25Gbps SFP cage. The wired router’s SFP cage can accommodate SFP modules for different types and speeds of Ethernet and fiber cables.

What Is A Wired Router?

A wired router forwards data packets between two networks and performs the traffic directing functions on the Internet. This networking device also connects to two or more streams of data from various IP networks. The most familiar type of wired routers falls under the category of home and small office routers that simply regulate the flow of data packets between an internal network and an external network — the Internet.

How To Set Up Your Wired Router & Wired Network Security?

Encryption helps in protecting data transmitted over a wired network from unauthorized access. Wired routers employ different encryption techniques to ensure security especially when you are connected to the Internet. One of these techniques, VPN hides your credentials and online behavior from the prying eyes of cybercriminals.

Keep your wired router and other network devices like wireless routers, access points or gateways away from areas where other people can have access to them like exterior walls, doors, and windows. Turn off your wired network appliances when they are not in use, especially at night or during vacations.

Remember that the wired network security that your wired router provides might become useless if the devices within have no security at the software level. Secure your devices with passwords and encrypt confidential files. Change passwords regularly. Disable file sharing. Most importantly, install security software on your devices. To identify which security software is the best for you, check out our dedicated review and buyers guide for antivirus, anti-spyware, anti-Trojan, software firewall solutions, and Internet security suites.

Despite the necessity of wireless routers due to the growth of wireless devices like smartphones, tablets, and laptops, wired routers remain relevant among homes and businesses. Wired networks backed by wired routers offer a simple yet proven secure environment than wireless networks. Hence, today’s market still offers a wide range of wired router options from various labels, carrying features that address the speed and security needs of users. Here are some of the key factors to consider when choosing and buying a wireless router.

Most wired routers come with a set of four Gigabit Ethernet ports and one WAN port that connects to the ISP. But if you have more computers at home, you may consider getting a wired router with more ports or looking for a network switch. Some models also come with a USB port that can host a removable storage device like a USB flash drive or an external hard drive.

Now a standard among wired routers, Gigabit Ethernet promises to deliver up to 1Gbps Internet speed, depending on what the ISP promises. However, do note that some models, like the Mikrotik hEX S, have a 1.25Gbps SFP cage that can accommodate SFP modules for different types and speeds of Ethernet and fiber cables. Depending on your network requirements, you have other options aside from the standard Gigabit Ethernet connection.

Buyers must look back at all of the features of the wired routers they are comparing and see if they go consistent with their respective price tags. Pick the router that supports the right Internet speed, carries adequate wired connectivity options, and comes with security features that go well with your network requirements.